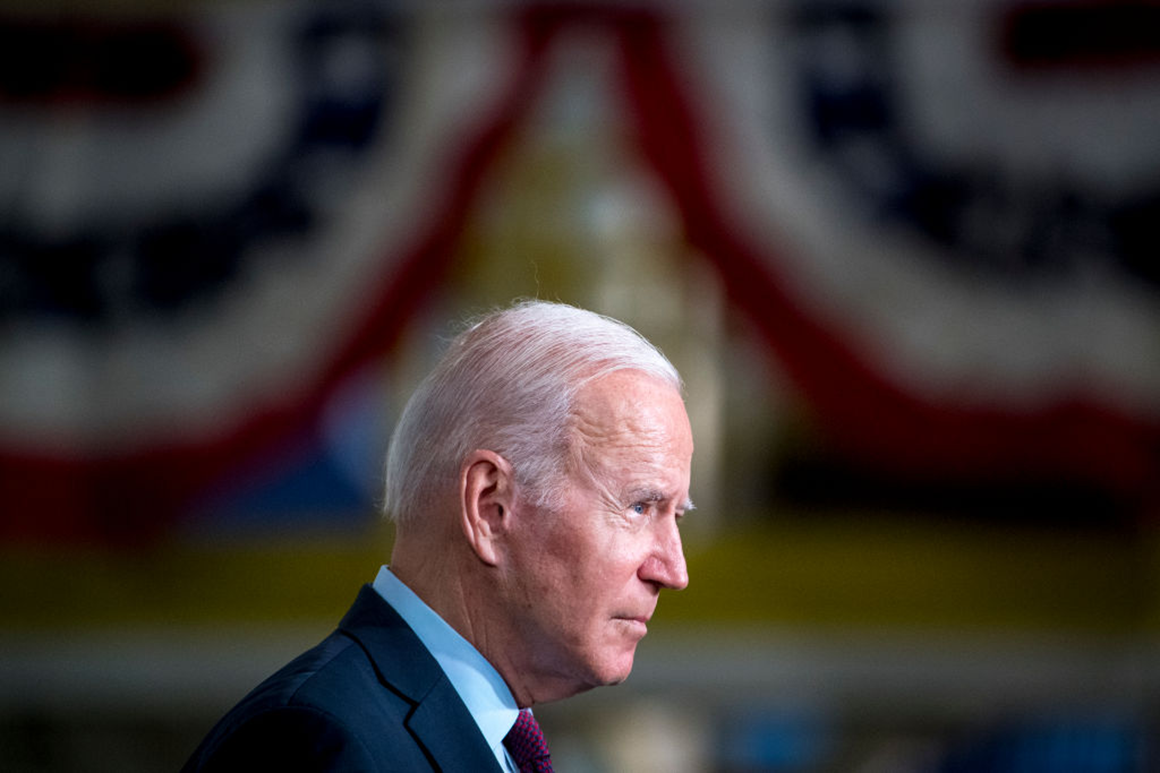 And thanks to the pro-Israel policies adopted under former President Donald Trump, Biden is in some cases limited in how he can respond.

The Israeli actions range from designating several Palestinian human rights groups as “terrorist” organizations to resisting Biden’s plans to reopen a consulate in Jerusalem that would engage with Palestinians. Renewed Israeli settler violence against Palestinians as well as Israeli plans to build more settlements in the West Bank have further frustrated the Biden team. The United States, meanwhile, has rankled Israel by imposing sanctions on an Israeli firm whose technology has been used to monitor and harass dissidents and others — including Palestinians.

Israeli officials are defiant, citing their security needs and sovereignty, even as they stress that the United States remains their most valued ally. They also dismiss many criticisms of Israel as unfair.

“The administration needs to respect the government of Israel,” Israeli Interior Minister Ayelet Shaked, a prominent member of the country’s right-wing political camp and its new coalition government, told POLITICO while visiting Washington this week. “We have needs. We have policy. There are issues [where] we will not agree with the administration. But in a family, we [do] not always agree on everything — everyone knows that.”

Publicly, the Biden administration also tries to emphasize the positive. This week, the U.S. ambassador to the United Nations, Linda Thomas-Greenfield, visited Israel and the West Bank — promising that the Biden administration is “committed to strengthening all aspects of the U.S.-Israel partnership.” She also stressed Biden’s support for the Abraham Accords, the diplomatic normalization agreements Israel struck with a handful of Arab countries under Trump.

Privately, U.S. officials say Israeli leaders need to accept that the Biden administration won’t reflexively side with them against the Palestinians as readily as the Trump team did.

“The Israelis appear to understand that they need a more normal relationship with us than the distortion of the past few years, and the administration clearly would welcome that,” a U.S. official familiar with the issue said. “Hopefully, we’re getting the message through that the best way to do that is by avoiding incendiary moves like new settlements, and by doing what’s needed to make real improvements in the lives of Palestinians living in Gaza and the West Bank.”

’No sense of security’

Palestinian advocates say Biden is not doing enough to increase the pressure on Israel, especially if he is serious about seeking a two-state solution to the decades-old conflict — something Trump said he could live without.

“Biden said human rights is a key, integral part of his foreign policy, and he has reflected that in the documents, the rhetoric, et cetera,” said Ubai Aboudi, a Palestinian American affected by recent Israeli crackdowns on rights activists. “It needs to be reflected by holding human rights violators accountable.”

Aboudi is the executive director of the Bisan Center for Research and Development, one of six well-known rights groups that Israel has labeled as terrorist organizations. The designation has sparked an international backlash, with many human rights organizations accusing Israel of trying to silence and financially starve groups that expose its abuses.

Aboudi also learned last month that his phone — like those of activists belonging to some of the other Palestinian groups — had been bugged using the now-infamous “Pegasus” software.

That software is the brainchild of the NSO Group, a private Israeli firm whose tech has been used to spy on dissidents, journalists, rights activists and others around the world.

Israel announced the terrorist designations just a few days after the Palestinian activists learned their phones had been bugged. That has led to suspicions that the Israeli government was the one using Pegasus to surveil the activists, and that it was trying to use the terrorism label as both a political cover and to distract from the NSO revelations. Some activists also suspect Israel is targeting the groups to undermine International Criminal Court investigations of its treatment of Palestinians.

“It’s quite difficult,” Aboudi said of the experience, speaking on a new phone that he hopes is not compromised. “You feel overwhelmed, no sense of security.” He further pointed out that he has been targeted by the Palestinian Authority, whose attempts to silence dissent also have drawn scrutiny from rights advocates.

The Biden administration has blacklisted the NSO Group, severely restricting its access to the U.S. market. The decision was rare because it targeted a firm based in a U.S. allied country, but Biden administration officials said it tracked with their interest in stopping “transnational repression.”

Israeli government officials are said to be lobbying the United States to reverse the decision. Separately, Israel is reported to be integrating facial recognition into a broad surveillance program monitoring Palestinians in the West Bank, alarming privacy and human rights advocates.

Shaked, the Israeli interior minister, declined to comment on the NSO Group, noting that it was a private firm — event though it is subject to Israeli Defense Ministry reviews and regulations. Israeli officials have denied that their government has access to the information gathered by NSO’s clients.

“They are all giving money to the PFLP,” Shaked alleged, referring to the Popular Front for the Liberation of Palestine, a group that has carried out armed attacks on Israel. “Those organizations are just cover organizations to take money from different states and transfer some of that to a terror organization.”

She said her government has shared solid evidence of the groups’ terror ties with the Biden administration. U.S. officials have declined to detail the material. But European governments have not been convinced by the information Israel shared with them, and an Associated Press review of at least some of the evidence determined it was thin at best.

Shaked expressed frustration that there was so much questioning of Israeli actions toward Palestinians when Palestinian militants are constantly threatening Israeli lives.

“You can’t compare between them — the fact that people compare, it’s outrageous,” said Shaked, who is known for strident views when it comes to Palestinians. “Israelis are being murdered for many years by Arabs.”

In response to a request for comment, a State Department official insisted that the Biden administration wants both the Israeli government and Palestinian leaders to “refrain from unilateral steps that exacerbate tensions.” That includes “providing compensation for individuals imprisoned for acts of terrorism,” the official said, referring to a controversial Palestinian practice Israeli leaders often decry.

Earlier this year, tensions between Israelis and Palestinians erupted into a short but deadly conflict. Hamas militants, who control the Gaza Strip, and other Palestinian armed groups fired thousands of rockets and mortars into Israel. Israel responded with its own airstrikes in Gaza.

The fighting, which Biden and his aides raced to end, killed some 260 Palestinians and a dozen Israelis. It forced Biden to pay more attention to the Israeli-Palestinian conflict, which overall he has been reluctant to do.

Shaked is a member of a coalition government now leading Israel after the defeat of longtime Prime Minister Benjamin Netanyahu, who himself hails from the country’s right-wing.

Netanyahu heavily cultivated Trump, and the former president returned the favor by making several decisions that benefited Israel at the expense of Palestinians. Those included recognizing Jerusalem as Israel’s capital and effectively greenlighting Israeli settlement construction in areas claimed by Palestinians for a future state.

The new Israeli coalition government is relatively diverse — including even an Islamist party — but it is headed by current Prime Minister Naftali Bennett, a right-wing Israeli politician. Bennett is seeking ways to improve the economic status of Palestinians, but he’s also continued policies that Biden aides believe undermine the possibility of a Palestinian state.

That included approving the construction of thousands of more homes for Israeli settlers in the West Bank. That announcement last month upset the Biden administration, which slammed the Israeli decision but appears powerless to stop it. Biden has ruled out conditioning U.S. military aid to Israel on such matters.

“The approval of the settlements was a profoundly unwelcome surprise and a profoundly unhelpful move, and that was made clear at a high level,” the U.S. official familiar with the issue said.

Recent reports of a rise in Israeli settler violence against Palestinians, too, have drawn concern in the Biden administration. Rights groups allege that the settler violence is part of a broader, often state-sanctioned effort to push Palestinians off of more land in the West Bank.

Shaked disputed that there was a rise in such violence; she pointed POLITICO to a tweet that cited Israeli police statistics. But rights groups argue such data is unreliable because Palestinians generally try to avoid the Israeli police. Shaked also said the settlement construction would continue, but added that her government wanted to have “an open dialogue” with the Biden team about it.

She was firm, however, that Israel would not allow the United States to officially reopen its consulate in Jerusalem. That diplomatic mission long dealt with the Palestinians, who preferred not to go through the U.S. embassy in Israel.

Trump closed the U.S. consulate and moved the U.S. embassy from Tel Aviv to Jerusalem. Those moves are tough to undo, politically but also financially and bureaucratically. Biden early on said he’d leave the embassy in Jerusalem. But his administration has pledged to reopen the consulate.

Some U.S. lawmakers warn Biden aides not to keep pushing off the consulate reopening.

“This was open for 100 years, closed by Trump, and it would be an important signal to the Palestinians that we are intent on being a broker for peace,” said Sen. Chris Murphy, a Democrat from Connecticut. “Every day that that consulate is closed makes it much harder to re-open.”

A new path to peace?

Israeli and U.S. officials, including American lawmakers from both the Republican and Democratic parties, are keen on building on one Trump-era accomplishment: the Abraham Accords.

Those accords, brokered in part by Trump’s son-in-law and senior adviser Jared Kushner, have seen a significant growth in diplomatic, economic and other relations between Israel and the United Arab Emirates, Bahrain, Sudan and Morocco. Kushner has launched an institute with the goal of building on the accords; POLITICO recently obtained a copy of its lengthy internal strategy document.

Shaked beamed as she described the blossoming ties, although she acknowledged that a recent coup in Sudan had led to some uncertainty about that particular agreement.

The Biden administration should “fully push” other countries to join the accords, Shaked said. “Of course, every country that joins the accords, they want something from the U.S.,” Shaked added. “If the administration will want to invest in it, I think they can expand it dramatically.” Israeli leaders in particular want to forge a formal relationship with a heavyweight neighbor, Saudi Arabia.

The accords have left the Palestinians feeling betrayed by Arab countries they long considered allies. But some in the United States say the Biden administration should leverage the agreements to find a way to resolve the Israeli-Palestinian conflict.

Democratic Sen. Tim Kaine of Virginia said he’s been in touch with the White House about this very idea.

“That was one of the reasons I came out so strongly in favor of the Abraham Accords,” he said. “I said I thought they’re good because I thought it might open up some opportunities in peace discussions that weren’t there before.”

Andrew Desiderio contributed to this report.