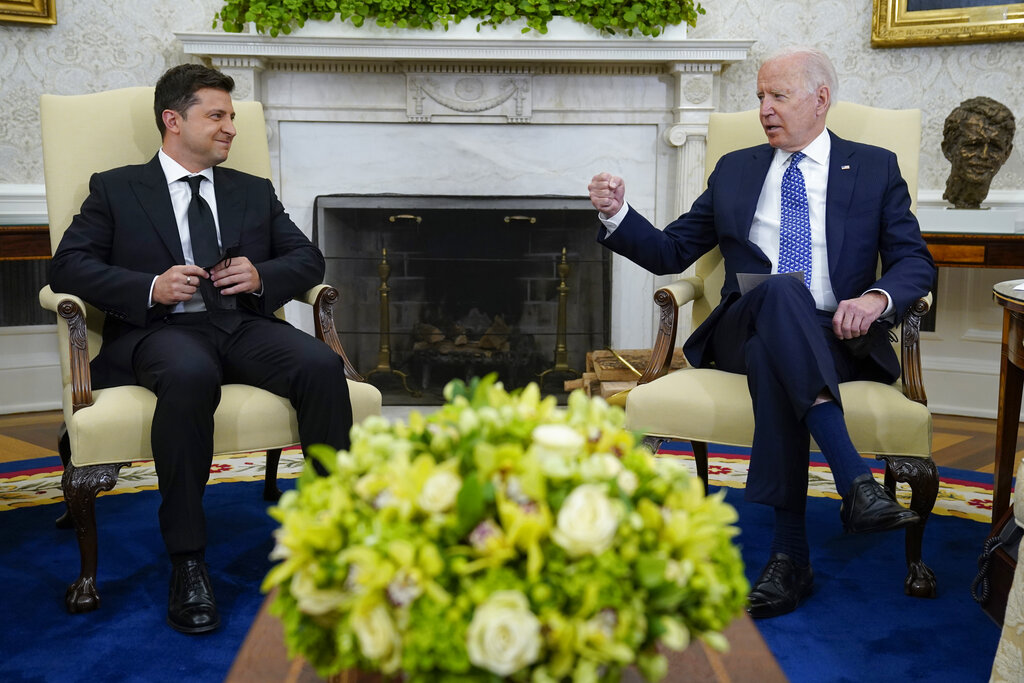 “President Biden underscored the readiness of the United States to engage in support of confidence-building measures to advance the implementation of the Minsk Agreements, in support of the Normandy Format,” the White House also said.

The two leaders’ conversation comes after Biden warned President Vladimir Putin of Russia in a call on Tuesday that the United States and European allies “would respond with strong economic and other measures in the event of military escalation” on the Russia-Ukraine border, according to a White House readout.

National security adviser Jake Sullivan elaborated later Tuesday that, along with imposing financial sanctions, the United States would “provide additional defensive material” to Ukraine and “fortify our NATO allies on the eastern flank with additional capabilities” if Russia invaded.

Sullivan also threatened steps by the United States to halt Nord Stream 2, the 764-mile-long pipeline under the Baltic Sea meant to transport inexpensive natural gas from Russia to Germany. “If Vladimir Putin wants to see gas flow through that pipeline, he may not want to take the risk of invading Ukraine,” Sullivan said.

Ukraine has conveyed concerns about Nord Stream 2, arguing it could reduce the country’s role in regional energy commerce. But Germany has maintained that Nord Stream 2 is vital to its energy security, and Russia views the pipeline as a means of expanding its influence across Europe while raking in revenue.

Secretary of State Antony Blinken previously spoke by phone with Zelenskyy on Monday, reiterating the United States’ “unwavering support” for Ukraine’s “sovereignty, independence, and territorial integrity in the face of Russian aggression,” according to a State Department readout.

Following his conversation with Zelenskyy on Thursday, Biden also held a call with leaders of the Bucharest Nine — a group of NATO countries on the eastern flank of the military alliance — to brief them on his call with Putin, as well as to “hear their perspectives on the current security situation” and to “underscore the United States’ commitment to Transatlantic security,” according to the White House.

“The leaders discussed Russia’s destabilizing military buildup along Ukraine’s border and the need for a united, ready, and resolute NATO stance for the collective defense of Allies,” the White House readout said. “President Biden stressed the U.S. commitment to continued close consultation and coordination with all our Transatlantic Allies and partners as we work towards de-escalation of the current crisis through deterrence, defense, and dialogue.”

The conversation on Thursday between Biden and Zelenskyy was not the first time the American president has huddled with his Ukrainian counterpart on the subject of U.S.-Russia talks.

In June, after Zelenskyy expressed outrage at the United States for waiving sanctions related to the construction of Nord Stream 2 and criticized Biden’s planned summit with Putin, Biden made sure to speak with Zelenskyy in a call prior to meeting Putin in Geneva later that month. Biden also invited Zelenskyy to the White House, where they met in September.

Myah Ward contributed to this report.