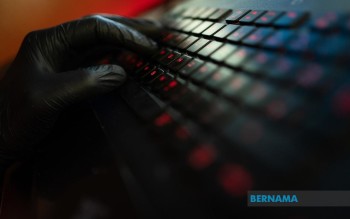 KUALA LUMPUR, June 22 (Bernama) — The intensity of cyber attacks towards organisations or individuals globally has increased significantly to reach a level of one attack every nine seconds, according to Veritas Technologies Malaysia.

Country director Sandy Woo said the trend of cyber attacks is continuously rising compared to one attack every 11 seconds recorded two years back as the malicious attackers or hackers were using more sophisticated techniques and tools to acquire the data.

“There are a lot of loopholes or attack surfaces that are very exposed to the perpetrator that it would be easy for them to get to organisations’ infrastructure and steal their data.

“Most companies and businesses that hold valuable data are exposed as data is everywhere, either it is hosted in the cloud services, which is not near to the organisations or in our mobile devices,” she told Bernama.

She said the best approach to mitigate the risk of data being stolen and subsequently extorted for organisations is to implement a three-to-one strategy.

“This approach requires businesses to have three copies of their data in two different locations and one other location which is remote from its current production.

“This is a very good approach for enterprises to ensure that in any case of outages, there is a way for them to recover and ensure its business continuity,” she said.

She said organisations needed to practice some drills or simulations of a cyber attack to create awareness among the employees in ensuring business continuity remained a priority upon experiencing an attack.

Sandy said small and medium enterprises (SMEs) are highly targeted by the attacker due to the lack of resources for them to take action of defending and detection during a cyber attack.

“SMEs are encouraged to subscribe to services that are readily available in the market so that they get access to the right level of protection and defence apart from continuously creating awareness among its employees with the latest technique of cyber attack,” she added.

It was reported recently that Malaysia recorded a total of 57.8 million virus attacks during the first quarter of 2022 which accounted for 1.14 per cent of the total cyber attacks around the globe.