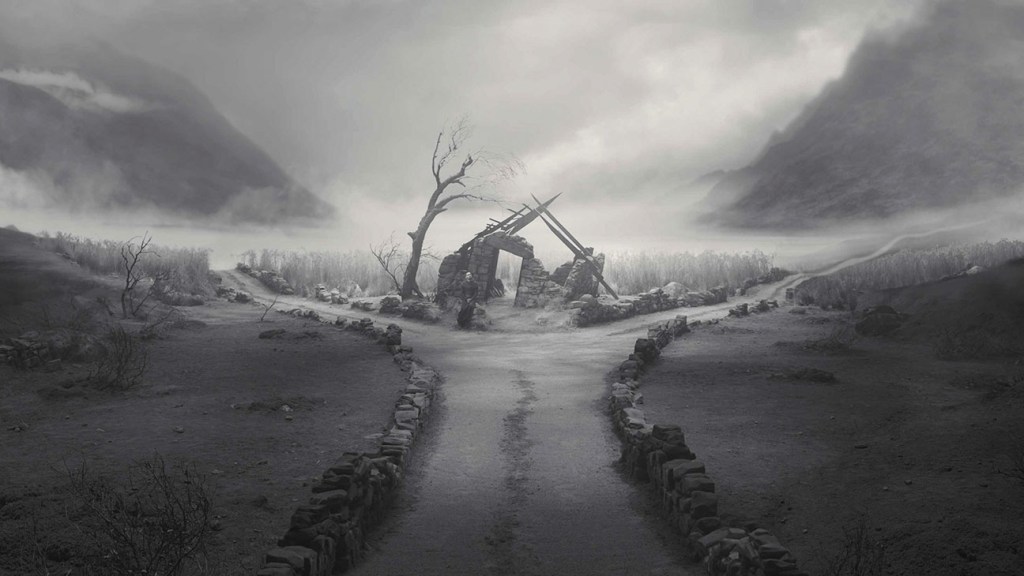 THE TRAGEDY OF MACBETH

A dagger appears in the corridor of Scotland’s Inverness Castle — an illusion of light falling upon a door handle — on the set where Denzel Washington as Macbeth performs one of William Shakespeare’s most famous soliloquies in A24/Apple TV+’s The Tragedy of Macbeth, written and directed by Joel Coen. The colonnade set was built on Stage 21 on the Warner Bros. lot.

“The visuals, with their basis in German expressionism, were designed to mirror the Thane of Cawdor’s fatal vision and allow the actor to be drawn toward the instrument he will ultimately use in his tyrannous rise to power,” explains production designer Stefan Dechant. “The door handle being an optical illusion of a dagger symbolizes intent. … Only at the end of the soliloquy, when Macbeth reaches the end of the hall and grabs the dagger’s handle, does the intent become real.”

On another set, constructed on Stage 16, Alex Hassell’s Ross sits at an abandoned bothy, a type of public shelter, at a crossroads (pictured above), where a matte painting completes the background. Dechant says he “intended to evoke the feel of expressionist films of the 1920s, like F. W. Murnau’s Sunrise, that embraced the synthesis of cinema and theatrical artifice.” The production’s black-and-white cinematography, lensed by five-time Oscar nominee Bruno Delbonnel, shaped the production designer’s perspective when imagining a visual palette. “Quite frankly, it kept me from considering color at all,” Dechant admits. “It allowed me to focus solely on form, texture, light and shadow.”

Mike Mills’ latest comic drama, from A24, is the intimate story of documentarian Johnny (Joaquin Phoenix), who bonds with his precocious nephew, Jesse, at his sister Viv’s home. For this location, the filmmakers used a Victorian house in Angelino Heights, which is the real-life home of artists Maximilla Lukacs and Todd Weaver.

“We added in the Noguchi floor lamp and swapped the overhead fixtures to milk glass schoolhouse pendants, which allowed for an atmospheric soft lighting,” explains production designer Katie Byron. “Then we placed various directional lamps throughout to highlight the textures of the set dressing in the background. This strategy especially matters when filming in black and white.”

Byron notes that items like the Noguchi lamp were the writer-director’s own, and the team also incorporated other pieces of furniture from Mills’ collection. “We brought in heaps of wildflowers daily, replaced some furniture with slimmer and simpler profiles, and wove Maximilla’s real-life layers of textiles into our own ideas,” she says.

She adds that they also included something Mills “had hoped for from the beginning”: a portrait of Louise Brooks, photo-mounted to foam core. “I think that really set a feeling and vibe for the wild femininity and majesty of the place.”

Production on Kenneth Branagh’s semi-autobiographical Belfast began in June 2020, at which time, because of COVID, the use of real locations wasn’t an option. The filmmakers’ solution was to build the streets and interiors of 1969 Belfast. One example is a street in the neighborhood where the young protagonist, Buddy (Jude Hill), lives with his family. The street was 240 feet long and 75 feet wide and constructed on the car park of a private airport called Farnborough in Hampshire, England. “The design brief was to create a world of fond memory of a family and its community caught up in troubled times, and where singing and laughter could suddenly fill the streets as much as the Troubles,” says production designer Jim Clay. “The terraced-style housing is typical of Belfast at the time, and what defines this street scene in particular for 1969 is the addition of the street barriers built during the Troubles from the sidewalk paving stones and burnt-out cars.” Research included archive photos as well as Clay’s memory of working in Northern Ireland on writer-director Mike Leigh’s 1984 TV movie Four Days in July.

In this shot from Netflix’s drama Passing, Clare Bellew (Ruth Negga) sits in the teahouse at the Drake Hotel in New York, which was filmed on location at the Brooklyn Botanical Garden. “That’s really supposed to place it in the 1920s and feel very modern and art deco,” says production designer Nora Mendis. “Essentially it’s the beginning of the film — both characters [Negga’s Clare and Tessa Thompson’s Irene Redfield] are passing. It’s a space where everybody is white, and so it’s meant to be beautiful but not comfortable. With the spareness and the kind of minimal feel of it, the idea was that there’s just sort of nowhere to hide.”

The room’s look required period-specific research, which included stops at the Schomburg Center for Research in Black Culture in Harlem; the Cooper Hewitt, Smithsonian Design Museum on New York’s Upper East Side; and the New York Public Library in Bryant Park. But Mendis says this scene is not meant to look exactly like the Drake, but more generally a period tearoom.

The decision to shoot the movie in black and white also influenced the design. “In these scenes we wanted it to feel more washed out and have a little bit less richness. It was very important that there was a lot of literal white. We didn’t bring in a lot of color or even so much pattern into this space in particular.” While other sets had “a lot of texture and color,” Mendis says, this location was “meant to be a little scarier and a little more whitewashed.”

This story first appeared in a December stand-alone issue of The Hollywood Reporter magazine. To receive the magazine, click here to subscribe.