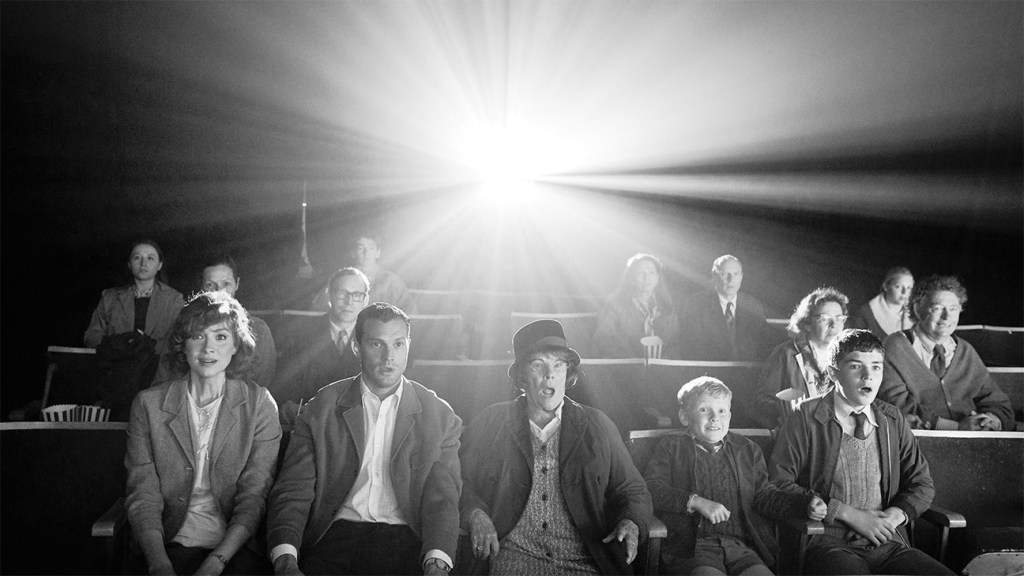 Focus Features’ Belfast, the story of a Protestant family set against the Troubles in Northern Ireland in 1969, was a personal one for director Kenneth Branagh as well as for Irish film editor Úna Ní Dhonghaíle, who co-wrote and co-directed 2014’s The Invisible Man about her own father’s experiences during that time. “That Ken retraces the footsteps of his past 50 years later chimed with me,” she says, “because I made a documentary with my father, who also retraced the footsteps of his past [as] a Catholic working-class boy. Because of huge civil injustices, thousands of Catholics were jailed.”

Belfast‘s subjective point of view allows audiences to connect with the film’s young protagonist, Buddy (Jude Hill), who at the start of the film is inadvertently caught in a street riot as Protestants attack a largely Catholic community. One noteworthy shot from that sequence was filmed “so beautifully on this circular track around the child at 60 frames per second,” Ní Dhonghaíle says, noting that she alternated frame rates in the edit to manipulate the time with picture, and that sound was used to “build the confusion — the silence first, and then the confusion.” She adds, “We had this buzzing track for this crowd approaching, which was out of focus [so] that you couldn’t see. It was quite a visceral cut, but also trying to be lyrical because we wanted to feel as the boy felt. And then of course the explosion took him out of the trance that he was in in this moment.”

From there, Ní Dhonghaíle remembers poaching crowd imagery from the dailies, “like snatches of memory as it would be for you or I if we were caught in a riot.” She also focused on the boy’s mother (Caitriona Balfe) as she grabs a dustbin and uses it as a shield to protect herself and her son. “We dipped into slow motion a little bit there, so the point of view could pass from Buddy to Ma and then back to Buddy again.” She adds that it was about keeping the cut “strong and lyrical” and conveying “the violence or the shock of it.”

The editor also emphasized the point when Buddy and his older brother, Will (Lewis McAskie), back inside their home, hide under a table. “Their performances under the table were exquisite [at conveying how] the children would have felt so that the audience could understand why this family would ultimately have to leave Belfast.”

This scene, as well as a riot toward the film’s end, served as the story’s “pillars,” she explains, noting that in between there was a lot of experimentation. “We knew that the riot at the end would be the final propulsion [for the family] to leave Belfast. But the scenes within the film, they were movable. We were constantly mining the [dailies] to see what else could we do.”

A scene featuring Will and Buddy in their garden is one that was removed and brought back — though as originally shot, it was meant to appear earlier in the film. “We just felt that we needed to track the danger to Will,” says Ní Dhonghaíle. “In the ’60s and ’70s, [both sides of the conflict] did try to recruit teenagers, and that was actually a major issue that we wanted to touch on. So we found ways of getting the footage back in.”

She explains, “Ken and I really were interested in just constantly looking at options or how to move the story forward, and Ken, although he wrote the most beautiful script, was really open to ‘auditioning’ — restructuring and finding ways that we could improve on the story.”

Ní Dhonghaíle cites a scene during which Pa (Jamie Dornan) is leaving to go back to work in London. “Buddy was crying and saying, ‘I don’t want to leave Belfast.’ And then we put the scene of the dad leaving them and Buddy sees him from the window,” she says. “Speaking as someone with two small kids who comes to London to work — the painful part is when you leave early in the morning when they are [still] asleep [from] the night before, and you haven’t had a chance to say goodbye to them.

“Moving that later in the film reduced the expositional feel of it and actually made it a much more emotional feel,” she adds. In the moment, Pa knows the family should leave the city for a new life in London. “He keeps looking back, [understanding] they have to leave Belfast, but the family isn’t ready to leave yet. Coming later in the film, it was even more poignant.”

Another key sequence was the parents’ dance during an Irish wake, late in the film. “Ma and Pa sort of come back to each other after so many arguments,” she explains. “The dance was a vital element to keep … that balance of the film as seen primarily through the child’s point of view. But also it was very important to dip into the adult side so that you understood the danger that was outside the door.”

She says that they cut a few additional musical numbers that were scripted to appear earlier in the film, but the dance scene that they kept felt exactly right.

“One of the things that I think we share, Ken and I, is the thing of celebrating how you can tell a story with a bit of movement,” says Ní Dhonghaíle. “You can make people laugh and then you can make them cry. We were trying to do that in the shape of our film to capture the cultural heritage we both share — the poignancy and the laughter go hand in hand.” They agreed that the dance belonged at that point in the story, “even though we did have to plant Granny (Judi Dench) in there looking a little sad because we didn’t want people to think that we were frivolous or cavalier.” Rather, the combination of sweetness and sadness was a chance to depict a particular cultural moment. “That is what happens at an Irish wake: You bury the person three days after they’ve passed, and it’s a celebration of life.”

Reflecting on the story, Ní Dhonghaíle concludes, “I think after the pandemic, it’s really important to me, the message of the film and the subtext of the film, about community and family and treating others well, and the love that we should protect for any of our family or friends or neighbors of all diversity, nationalities and creeds. … This story could resonate for any family, from any country, who has to escape owing to the violence or the intolerance of the time.”

This story first appeared in the Nov. 17 issue of The Hollywood Reporter magazine. Click here to subscribe.