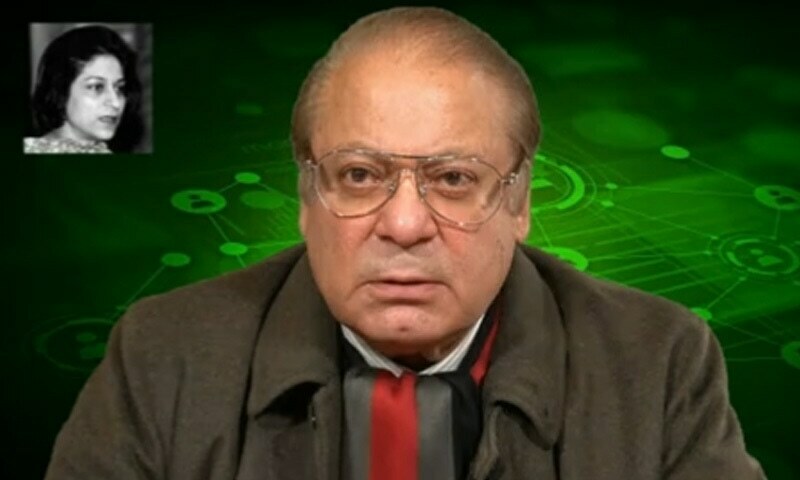 The organisers of the Asma Jahangir Conference condemned the alleged “muzzling” of PML-N supremo Nawaz Sharif’s speech on Sunday, after internet services at the venue were reportedly suspended soon after his address began.

Nawaz began his speech — relayed from London via video link during the closing ceremony of the keenly watched conference held in Lahore — by paying tribute to the late celebrated lawyer and human rights activist Asma Jahangir, but the live stream abruptly stopped shortly after.

Munizae Jahangir, Asma’s daughter and one of the organisers, confirmed to Dawn.com that some people had cut off the broadband internet wires at the conference venue and mobile internet was suspended soon after Nawaz began speaking.

In a statement issued after the event, the organisers regretted what they termed “the state’s highhandedness” for allegedly blocking Nawaz’s speech.

“The organisers of Asma Jahangir Conference 2021, which include the Supreme Court Bar Association, Pakistan Bar Council, and the AGHS, strongly condemn this act and consider it an onslaught on the freedom of expression. These steps can never deter our resolve to give voice to the marginalised communities.”

When reached for comment on the allegations, federal Information Minister Fawad Chaudhry said he was not aware of any such move by the authorities. Meanwhile, Punjab government spokesperson Hassan Khawar did not respond to the request for comment.

After the video call was cut off, the organisers arranged for a telephonic address by Nawaz, according to their statement.

It quoted Munizae as saying: “We believe in freedom of expression that is why this non-partisan platform is open to everyone and we condemn the muzzling of the closing session where Mian Nawaz Sharif was going to make an address.”

Nawaz calls for a ‘national strategy’

In his wide-ranging speech, Nawaz called for immediately devising a national agenda to pull Pakistan out of its current crises and take it on the path of democracy, reiterating the need to “put our house in order”.

The former prime minister once again hit out at the military establishment and criticised interference in judicial and government affairs that he claimed had led to Pakistan’s “downfall”.

He said the current era that Pakistan was going through was a “turning point” in its history.

“The most dangerous aspect is the deepening disappointment and severe helplessness [among the people],” he said. “History is witness that when nations descend into the quagmire of despair, questions start to be raised about that nation’s survival.”

He said the 220 million people of Pakistan were demanding answers to some fundamental questions and until they received those, the country’s state of affairs would not improve.

“If the tongue of the questioner is pulled, this does not resolve problems,” he added, likening the allegedly deliberate internet disruption during his speech to “pulling [our] tongue”.

“Will this solve problems? And then picking up those asking questions and disappearing them, will that end the questions? Unfortunately, the current era has proven to be the blackest era for freedom of speech and human rights.”

Nawaz said regional and international circumstances had accentuated Pakistan’s need to “correct ourselves”.

“That is why I said repeatedly that we have to put our house in order and we should open our eyes. Then the drama of ‘Dawn leaks’ was staged against us, punishments were given to us through fake cases, and then you saw how [we] were humiliated,” he told the audience.

But he said the time had come for the voices present at the event to “gather on one platform and draft a national agenda and give it the shape of a national movement”, for the sake of the rule of law and democracy.

“My suggestion is that [based on] all the recommendations given in this conference, an immediate strategy be formed and everyone sit together, so that the path of practical struggle can be adopted. It is very important. We have been very late and cannot afford more delay. This work should be done today,” he stressed.

Hours before Nawaz’s virtual address, a number of senior government members criticised the organisers for having invited an “absconder” and “convict” to speak at the conference attended by senior judges and human rights figures.

Information Minister Fawad Chaudhry said he had been invited to the event, but he had been informed that “the conference will be closed with the speech of an absconding convict; this is obviously tantamount to ridiculing the country and the Constitution [which is why] I declined to participate in the conference.”

In a taunt at the conference’s theme — “Challenges to human dignity”, Energy Minister Hammad Azhar tweeted: “Think positive; Perhaps the idea was to focus on [the] human rights of absconders..”

NAB a ‘tool to convert people into turncoats’: Abbasi

Earlier, former prime minister Shahid Khaqan Abbasi while addressing the conference lashed out at the National Accountability Bureau (NAB) and branded it a “tool to convert people into turncoats”.

The PML-N leader gave a speech detailing his grievances against the watchdog and held it responsible for a series of ailments plaguing the country.

During his speech, Abbasi said that in one of the cases filed against him the chargesheet was 35 pages-long, while the NAB reference was 19 pages-long. “You can write anything in any chargesheet […]. What are we doing, where are we going?”

Lamenting the country’s current situation, he continued that the law required him to maintain financial records for the last seven years. However, he was being accused of something that occurred 35 years ago, he said.

“If you accuse me of something, then you also need to give the record for [the last] 35 years. I definitely cannot. I am all for accountability … [but] NAB is not accountability,” he said, accusing the anti-graft watchdog of being a tool to carry out political engineering.

“If you want accountability of politicians, it is very simple. The whole world does it. You don’t need special laws, it’s about tax laws.”

The PML-N leader stated that those who impose taxes on the people of Pakistan should give details of their own assets and answer for their own lifestyles.

“If members of parliament walk out to [sit in] a vehicle that costs Rs30-60 million, go to their Rs500m home [with a] monthly electricity bill of 0.2m. And they pay no taxes, what does that tell you?

“That’s a corrupt politician. Why don’t we go after them? Let us start with the president of Pakistan. Let the prime minister be next, followed by the leader of the opposition.

“Ask them this basic question: how do you justify your lifestyle?”

‘NAB is now solely about victimisation’

The PML-N leader stated that the anti-graft watchdog was now solely about “victimisation”, the price of which was being borne by the people of the country.

He continued that accountability and electoral laws could only be amended through consensus. He lamented the fact that when the opposition presented amendments to the laws, they were later disregarded and branded by the government as an attempt to seek an NRO (National Reconciliation Ordinance).

Abbasi also drew attention to the “negative impact” NAB cases can have on an individual.

He stated that public figures were the only ones subjected to the accountability process every five years and called for having transparent investigations into such allegations.

“Install cameras in court rooms and investigation rooms. Accuse me in front of the people,” he said, calling the bureau “a tool to convert people into turncoats and to sell their souls”.

Abbasi said that tax laws should be used to disqualify politicians, or use Articles 62 and 63 of the Constitution against them.

Recounting the process of legislating on the issue of appointing judges, he said that he had moved an amendment which stated that anyone wishing to become a judge should present his tax history for the last 10 years.

“You’d be surprised at how many people who have not paid taxes became judges.” He added that those judges who were unable to do so were either not technically qualified to be judges or had hidden their income.

“Are they qualified to judge me tomorrow?” he asked.

No pressure on judiciary, says CJP

On Saturday, Chief Justice of Pakistan Gulzar Ahmed addressed the first day of the Asma Jahangir Conference and denied that the judiciary was being influenced by or taking dictation from other institutions.

The chief justice was responding to comments made by former president of the Supreme Court Bar Association, Ali Ahmad Kurd, earlier during the conference. While commenting on the topic of the conference — “Role of Judiciary in Protecting Human Rights and Strengthening Democracy” — Kurd had directed a barrage of criticism towards the judiciary.

In response to Kurd later in the conference, CJP Gulzar said he “absolutely did not agree” with the assessment made by the senior lawyer. He rubbished the allegation that “our courts are not free” and that “we are working under someone’s pressure or of the institutions.”