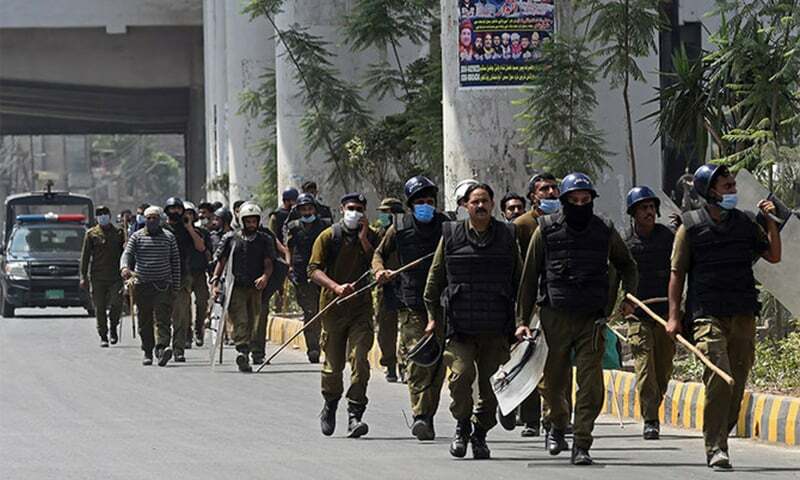 LAHORE: Another police official who was critically injured during the violent protest by proscribed Tehreek-i-Labbaik Pakistan at Sadhoke succumbed to his wounds in hospital here on Monday, raising the death toll of the TLP march to five.

Identified as assistant sub inspector (ASI) Mohammad Abubakar, the deceased hailed from Jhang district and was under treatment at the critical care unit of the Lahore General Hospital for critical head and chest injuries.

According to police, Abubakar was serving as personal staff officer (PSO) to the Iqbal Town (Lahore) SP and came under attack at Sadhoke, the most troubled point where hundreds of police officials were injured in clashes with the TLP activists during its march on Islamabad.

An official said the police faced most violent attacks from the TLP workers at Sadhoke near Gujranwala, where the latter were reorganised after leaving Lahore on Oct 23 and attacked the policemen and the paramilitary personnel in groups, firing teargas shells and some of them even shooting straight on the police.

Sharing official figures, he said total 520 policemen were injured by the violent TLP workers in Lahore and two other security points on the GT Road on their way to Gujranwala.

Of the injured policemen, 17 got critical head and chest injuries after they were allegedly taken hostage by the marchers and subjected to brutal torture at Kala Shah Kaku, Muridke and Sadhoke, he said, adding that later two of them succumbed to their wounds in local hospitals. He said that two police official had already lost their lives in a violent attack by the TLP activists reported near Chauburji in Lahore.

The record of various public hospitals confirmed that four of the 17 critically injured policemen suffered bullet wounds, he said.

He said that official inquiries confirmed that the TLP men fired bullets straight on police using sub-machine guns (SMGs) and injured five of them. One of these five personnel embraced martyrdom, he added. “The TLP workers clashed with police on multiple occasions since Oct 22, when the latter announced their march on Islamabad,” he said.

A police spokesperson said the IGP also visited the families of martyred Constable Ghulam Rasol and ASI Muhammad Akbar at Kasur and Chunian, respectively, where he offered Fateha for them.

He also lauded the patriotic spirit of the injured policemen and said the department as well as the whole nation was proud of those who stood firm to protect lives and properties of the citizens.

“The sacrifices of martyred police personnel reflect the fact that supremacy of law & order and writ of the state were the top priority for the police force,” the IGP said.

In Lahore, the funeral prayers for ASI Muhammad Abubakar were offered at the District Police Lines, Qila Gujjar Singh.

Later, the IGP and the CCPO laid wreaths on the coffins of the martyred ASI, the spokesperson said.