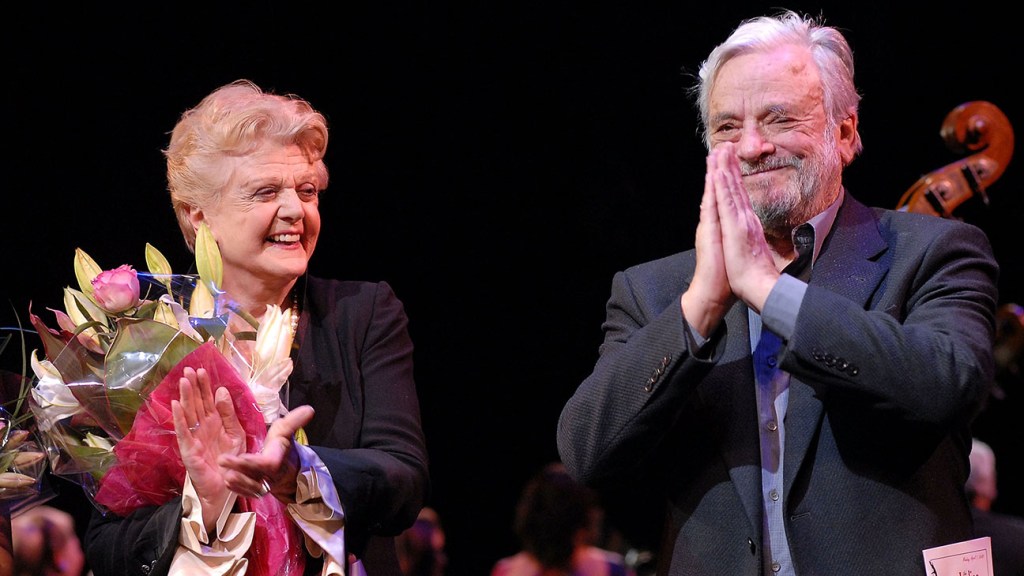 No contemporary artist has been as instrumental in testing, torching and redefining the boundaries of American musical theater as Stephen Sondheim, who died early Friday at his home in Connecticut, aged 91. An unparalleled giant in the field, his influence has helped shape generations of composers and lyricists and will continue to do so, and his loss stings like few others.

We tend to think of our cultural heroes as immortal, and Sondheim was an undisputed genius who commanded a god-like respect. With news of his death still sinking in, it’s difficult to comprehend that we’ll never again experience the anticipation of seeing a new Sondheim show for the first time.

But the ongoing vitality of his work — especially for an artist who had so assiduously sidestepped the commercial mainstream — means that Sondheim is destined to remain with us. He leaves an indelible cultural imprint that will continue to inspire investigation, reinterpretation and reinvention, just as he himself welcomed radical new takes on his musicals in his lifetime.

In the weeks surrounding Sondheim’s death, a major off-Broadway revival opened of Assassins, his dark 1990 musical about historical figures who assassinated or attempted to kill American presidents. Director Steven Spielberg and screenwriter Tony Kushner’s big-screen remake of West Side Story, the multiracial New York street-gang retelling of Romeo and Juliet for which Sondheim penned the lyrics, opens Dec. 10. And a gender-flipped revival of Company, the 1970 musical that dismissed frothy conventions of romance to explore relationships and commitment with blistering ambivalence, opens on Broadway Dec. 9, after being delayed a year and a half by the pandemic shutdown.

How many nonagenarians working in the arts at any period in time can claim that kind of cultural relevancy?

Just last week, Netflix premiered the film adaptation of Rent composer Jonathan Larson’s autobiographical first musical, Tick, Tick… Boom!, which features a playful appearance by Sondheim as a character, portrayed by Bradley Whitford. That homage is a testament to Sondheim’s massive influence on both the late Larson and Hamilton composer Lin-Manuel Miranda, who made his directing debut with the film and has never been shy about acknowledging his debt to Sondheim.

There was a moment in late 2019 when Sondheim suddenly seemed to be everywhere. Adam Driver belted out the searing emotional confession “Being Alive” from Company in Noah Baumbach’s nonmusical drama Marriage Story, while Scarlett Johansson led a trio on “You Could Drive a Person Crazy,” from the same show, signaling her character’s emancipation from Driver’s.

In Greta Gerwig’s Lady Bird, the theater kids auditioned for a high school production of Sondheim’s Merrily We Roll Along, that reverse-chronological 1981 show’s rueful look back at the evolution of life and friendship strangely mirroring the fumbling steps toward growth and independence of Saoirse Ronan’s protagonist.

(The commercially disastrous original Broadway run of that show is chronicled in the terrific 2016 documentary, Best Worst Thing That Ever Could Have Happened, while a film version of Merrily is in the pipeline from director Richard Linklater, to be shot, like Boyhood, at intervals over more than a decade, allowing leads Ben Platt, Beanie Feldstein and Blake Jenner to age along with their characters.)

There was also Billy Crudup and Jennifer Aniston on The Morning Show, singing the tender duet “Not While I’m Around,” from Sondheim’s masterful 1979 saga of obsession, revenge and bloody barber-shop murder, Sweeney Todd.

But more subtle references also appeared, like Daniel Craig’s detective in Knives Out singing a few bars of “Losing My Mind,” from Sondheim’s ghostly 1971 reassessment of the past, Follies. That may have been writer-director Rian Johnson’s sly way of acknowledging another all-star whodunnit, The Last of Sheila, a 1973 film co-written by Sondheim and Anthony Perkins that remains ripely enjoyable despite being a flop at the time.

My own first taste of Sondheim on stage was in 1984, on my first visit to New York, catching Sunday in the Park With George in previews with original stars Mandy Patinkin and Bernadette Peters. That complex diptych about the difficult balance of life, art and commerce was still coming together at the time. But like so many Sondheim musicals, it has continued to resonate deeper with me in each subsequent encounter, most recently the ravishing 2017 Broadway revival with Jake Gyllenhaal and Annaleigh Ashford.

The celestial choral number “Sunday,” which closes the show’s first act, is a rapturous hymn to beauty, nature, art, to capturing a moment in time; it might be the most exquisite song Sondheim ever wrote. Hearing it, you feel airborne. (“Sunday” also gets its own lovely riff in the Tick, Tick… Boom! film, with a host of Broadway luminaries dropping by.)

Ruefulness, regret, aloneness and fear of change are themes that run through many of Sondheim’s greatest works, so it makes sense that they land differently at different ages.

That’s certainly the case for me with the melancholy nostalgia of Follies, which I knew almost by heart in my 20s, when a friend worked as wardrobe master on frequent Sondheim collaborator Harold Prince’s 1987 London production. That access not only allowed me to see the show countless times during its run but also to meet such legends as Diana Rigg, Dolores Gray and the divinely eccentric Eartha Kitt. The latter took over from Gray during the run as Carlotta, who performs the ultimate showbiz survivor anthem, “I’m Still Here.”

My fond memories of that time didn’t prepare me for the emotional gut punch of the show when it returned to Broadway in 2011, with Peters, the late great Jan Maxwell and Danny Burstein plumbing shattering depths as their characters contemplated choices made and roads not traveled.

I met Sondheim several times during my years as chief theater critic first for Variety and then for The Hollywood Reporter. He was, unsurprisingly, as brilliant and exacting a conversationalist as he was an artist.

At a Museum of Modern Art dinner to mark a mini-season of films he programmed there, we picked apart the pros and cons of a 2004 Broadway revival of Pacific Overtures. Perhaps his most audaciously uncommercial musical, it reflects on the westernization of 19th century Japan from a Japanese perspective and contains a song Sondheim has often singled out as a favorite, “Someone in a Tree.” In that virtuoso feat of concentrated narrative, the same incident is recounted by three different people with contrasting views. The refrain, “I was younger then,” again exemplifies the infinite shadings Sondheim brings in so many musicals to the universally human process of looking back.

Pacific Overtures was revived in New York in a gorgeous, stripped-down off-Broadway production in 2017. While it often jostles for supremacy in my mind with Sweeney Todd, on most given days I’d call it my favorite Sondheim show. The kabuki-style original 1976 Prince production was a lavish failure on Broadway, closing after just six months. Thankfully, it was filmed for Japanese television, and that pristine recording remains a singularly thrilling experience.

Among the many times I saw Sondheim in New York over the past two decades, I’ll choose to remember him not in the audience casting a surgical eye over his own work but leaping to his feet to applaud the creation of an upcoming composer, like Miranda, or fellow veterans, like John Kander and Fred Ebb.

There are pluses and minuses to most film versions of Sondheim shows, the low point being one of Prince’s few forays behind the camera with the disastrous 1977 adaptation of A Little Night Music. That waltz-signature reverie of loves lost and time past sacrificed much of its delicacy and sophistication in a lead-footed film not helped by a miscast Elizabeth Taylor in the lead.

Other films like Tim Burton’s Sweeney Todd, Rob Marshall’s Into the Woods and Mervyn LeRoy’s Gypsy, for which Sondheim wrote lyrics only, have both admirers and detractors. Perhaps the most unanimously loved of them is the original 1961 film of West Side Story, co-directed by Robert Wise and choreographer Jerome Robbins. That gives Spielberg large dance shoes to fill, especially now that the new film will take on the added weight of commemorating a great artist so recently lost to us.

If you’re a Sondheim novice and want to experience him at his best in an easy-access format, I heartily recommend the performance filmed for television in 1982 of Sweeney Todd during its first national tour, directed for the stage by Prince and starring Angela Lansbury and George Hearn. In terms of wit, wordplay, diabolically clever rhymes and vigorously imaginative musical storytelling, there’s nothing like it. The duet between the demon barber of the title and his murderous accomplice, Mrs. Lovett, “A Little Priest,” is easily the funniest, cleverest song ever written about serving human flesh in pies.

But whether it’s in a recording or on film, you can’t go far wrong with any Sondheim. That includes his more challenging works, like the operatic 1994 tale of manipulative romantic obsession, Passion, or even his final musical to be produced, the flawed but fascinating saga of two entrepreneurial brothers in early 20th century America, Road Show, which played off-Broadway in 2008.

That magnificent Sondheim interpreter Elaine Stritch perhaps best summed up my feelings. During an interview for The Los Angeles Times that had stretched into a long, discursive chat about her mortification when she kept flubbing lines in the 2009 Broadway revival of A Little Night Music, she shook her head with a mix of fear and reverence and said, “It’s fuckin’ Sondheim, for God’s sake!”