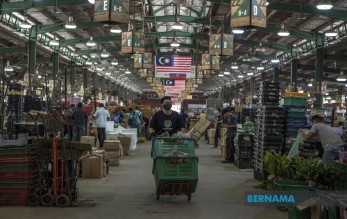 Its Licensing and Business Development Department director, Khairul Anuar Mhd Juri said the action was in line with the conditions set under the Wholesale Market By-Laws (Federal Territory of Kuala Lumpur) 2002.

“DBKL had worked hard to ensure that foreign nationals no longer work at PBKL. Perhaps there are still individuals secretly hiring foreigners but sometimes, this could not be prevented.

“But if there are, we will arrest and issue the licence holders with a show cause letter and in come cases, their licence have been cancelled,” he said at a news conference after the launching of the book, ‘Transformasi Pasar Borong Kuala Lumpur – Menjana Ekonomi Norma Baharu’ (Kuala Lumpur Wholesale Market Transformation – New  Norm Economy Generation), here, today.

It was officiated by Kuala Lumpur mayor, Datuk Seri Mahadi Che Ngah. The book is a documentation of the experiences and implementations under the new norm at PBKL during the COVID-19 pandemic since two years ago.

Khairul Anuar said the enforcement action taken against the foreign traders and workers had opened up business and employment opportunities for the locals affected by the COVID-19 pandemic or who lost their jobs due to it.

“To attract the locals to work at PBKL, various facilities are provided including hostels and contributions made to the Employees Provident Fund (EPF),” said Khairul Anuar, adding that complaints on the matter were less now following stern enforcement action by DBKL.

Meanwhile, Mahadi in his officiating speech said the new norms had resulted in the formation of the PBKL New Norm Economy Generating Task Force, besides the ‘whitening’ of foreign workers at this wholesale market and taking action against employers involved in human trafficking.

“This task force has also managed to educate the wholesalers to adhere to the conditions of their licence and carry out their responsibilities well as this will indirectly open up opportunities and space for city dwellers who lost their income or have been affected by the COVID-19 pandemic.

“The various efforts taken have also reduced crime such as vandalism and robbery, besides improving the PBKL surroundings,” he added.

Mahadi said DBKL had also improved the management of PBKL and its infrastructure, introduced the wholesaler and worker passes, and installed closed-circuit television cameras during the implementation of the new norm at this wholesale market.