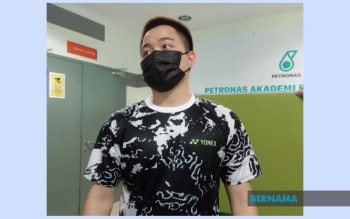 The world’s sixth-ranked pair, who ended Malaysia’s 16-year drought by winning the men’s doubles gold medal at the 2019 SEA Games in the Philippines, are now busy planning the best strategy to realise the dream in front of home supporters.

“Actually, every tournament we felt that was the time (to win) but many times it was just not enough. We will still try…. It is not easy to win but that is what we have to face through in stages,” said Aaron to reporters at the Malaysian Badminton Academy (ABM) in Bukit Kiara here, yesterday.

Playing on home ground, the 25-year-old said they hoped for support from badminton fans in the country as motivation to put on an excellent performance at the tournament.

In fact, Aaron admitted that he was excited to make an appearance at the Malaysia Open after the prestigious tournament had not been held for two years following the COVID-19 pandemic.

“I hope the fans continue to support us and hope we can do our best at the Malaysia Open so as not to disappoint the fans,” he said.

He also expressed hope to make up for the defeat in the second round of the Danish Open last year at the hands of Akira Koga-Taichi Saito from Japan, in the upcoming Malaysia Open.

According to him, the duo, who bagged the bronze medal at the Tokyo 2020 Olympic Games, will remain focused and continue to listen to the advice given by Badminton Association of Malaysia (BAM) doubles coaching director Rexy Mainaky in achieving the best performance.

“Coach Rexy did say we have to be more ‘hungry’ to win in every game because it is clear that when we were in the semi-finals or the final, maybe we think too much so we were less focused on the match,” he said.

Meanwhile, he said they were still in the process of recovering from food poisoning when participating in the Indonesia Masters 2022, last week.

Last Saturday, Aaron-Wooi Yik lost in the semi-finals of the Indonesia Masters at the hands of Chinese pair Liu Yu Chen-Ou Xuan Yi 21-18, 21-13.