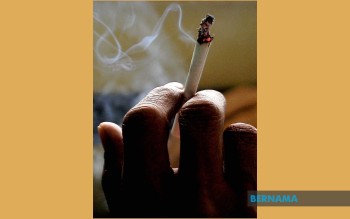 KUALA TERENGGANU, June 22 (Bernama) — The Terengganu Health Department has issued a total of 1,781 notices under the Tobacco Products Control Regulations 2004 with compounds totalling RM440,200, since January this year.

Its director, Datuk Dr Kasemani Embong said it was an increase of almost double, compared with the same period last year which recorded 943 notices issued involving compounds of RM243,550.

She said the increase was due to the frequency of enforcement activities carried out this year as eateries and restaurants were allowed to resume operations after the country entered the transition to the endemic phase.

“Compared with last year, the operation of eateries and restaurants is quite limited. We also receive many complaints from the public about individuals who still ignore the smoking ban at eateries.

“These offences were detected as a result of enforcement carried out against 27,715 no-smoking premises throughout Terengganu thus far. We will continue to intensify enforcement to protect non-smokers from being exposed to the dangers of smoke and vapour from smoking products,” she said.

She said this to reporters after inspecting the enforcement activities under the ‘Ops Gomo Asap Malam’ operations here last night. A total of 55 personnel were deployed to three districts, namely Kuala Terengganu, Kuala Nerus and Marang with more than 75 premises inspected.

Among the offence notices issued were smoking at prohibited areas, failing to display a no-smoking sign on the premises, and selling tobacco products at an unapproved retail sale price.